SmartSLIDER Reflex 560 and DigiDRIVE Basic are two of the products for timelapse created by the Italian company SmartSystem. Our Italian friend Maurizio Pignotti has used them for a while, and decided to review them for our community.

SmartSystem is an Italian company, constantly growing in the last five years, that has its headquarter in Fano (PU). SmartSystem is manufacturer of a wide range of 100% Made in Italy professional video products.

SmartSystem’s CEO and founder, Andrea Falcucci is a young and brilliant Mechanical Engineer specialised in Aerodynamics.

My choice: SmartSLIDER Reflex 560 together with DigiDRIVE Basic

Why SmartSLIDER Reflex 560 and DigiDRIVE Basic? Many people know my photography style and genre. My time lapses are always made by night, in hard conditions in terms of visibility and weather.

For these reasons I was searching for a light and compact slider that could also be strong and well made in every part.

After a long quest my attentions went on the lightest version of the SmartSystem sliders. There’s also a “PRO” version, that is even stronger, but the lighter one is the best for my works because it combines in a single slider lightness, smoothness, precision and portability.

There are three versions of the SmartSLIDER Reflex, different one from each other only because of the real carriage stroke: 800, 560, and 410mm. I chose the 560 one that has an intermediate length between the three models.

The reasons that have lead me to this choice are mainly:

The products are sold well packaged and, if asked, with padded bags for a better portability and to grant a better protection to the products while moving.

To control the slider movement I chose the DigiDRIVE Basic. SmartSystem produces also another drive called DigiDRIVE Portable, but the settings versatility, the movement’s precision and the possibility to upload customised movement programs and variable speed time lapses persuaded me to buy the most advanced drive. The SmartSLIDER Reflex 560 is 700mm long but the real stroke is (as the name suggests) 560mm. The slider was tested up to 13 kg and is really light: 1.9 kg. It is equipped with an adjustable friction system that helps when the slider is used inclined, and with a brake system that’s really useful in every change of location. Moreover on the carriage is installed a level bowl that allows to check the right inclination of the slider.

The structure of the slider is entirely aluminium made to minimise the total weight. The black color is realised by anodisation, and together with the laser marking on the carriage and on the two sides gives to the SmartSLIDER Reflex a charming appearance.

To increase the rails inflexibility, SmartSystem chose to place the two sliding bars in a sloping position from the axes.
In the lower part of the rails three fixing plates are installed, equipped with 3/8” and 1/4” standard fixing holes. One plate is perfectly at the center of the slider length while the others are positioned near the two slider’s endings. This solution grants the best versatility in usage: I always used the slider only on one single tripod fixed on the central plate, or on a lateral one leaning the other side on the floor or on a rock, but is also possible to fix the slider on two tripods fixed on the two lateral plates. I must say that whatever fixing I choose, the SmartSLIDER Reflex structure grants me a great stability.

Another feature of the SmartSystem’s sliders is the presence on the left and right endings of two 5/8” holes that allow to fix the slider on every light stand. Even if this feature is pretty useless for those using it for time lapses only, I think that SmartSystem sliders are the only ones with this feature that also allows to use the slider upside-down.

SmartSLIDER Reflex could also be leaned on a surface without any tripods: in fact it’s equipped with four small rubber feet. Moreover to every SmartSLIDER Reflex is possible to add the additional Outrigger Feet Reflex to increase the slider stability in every condition.

Here are some information and features about the slider that I found directly on SmartSystem official website. Every SmartSystem product can be expanded with its motion kit.

DigiMOTOR Reflex thanks to its features of ease of installation and uninstallation, movement smoothness and the possibility of working also in vertical, with loads even higher than the reflex, head and others accessories, make every SmartSLIDER Reflex extremely versatile.

Installing the motor on the slider is really simple and intuitive, obviously it’s really important to fix the belt as well as possible and with the right tension to avoid any micro vibration on vertical movements. The motor is really powerful and works great also with heavier payloads. The motor case is aluminium made and the fasten/unfasten is simplified by a dedicate fixing knob.

The belt installation is fast and simple.
The belt, made in a special material grants the maximum flexibility and anelasticity. The connection of the cable is easy and handy. I let the motor always mounted and put it in the padded bag with the slider. In this way the installation “on the field” is extra-fast. Small, lite and extremely powerful that’s what I thought the first time I used it.
Technical features: 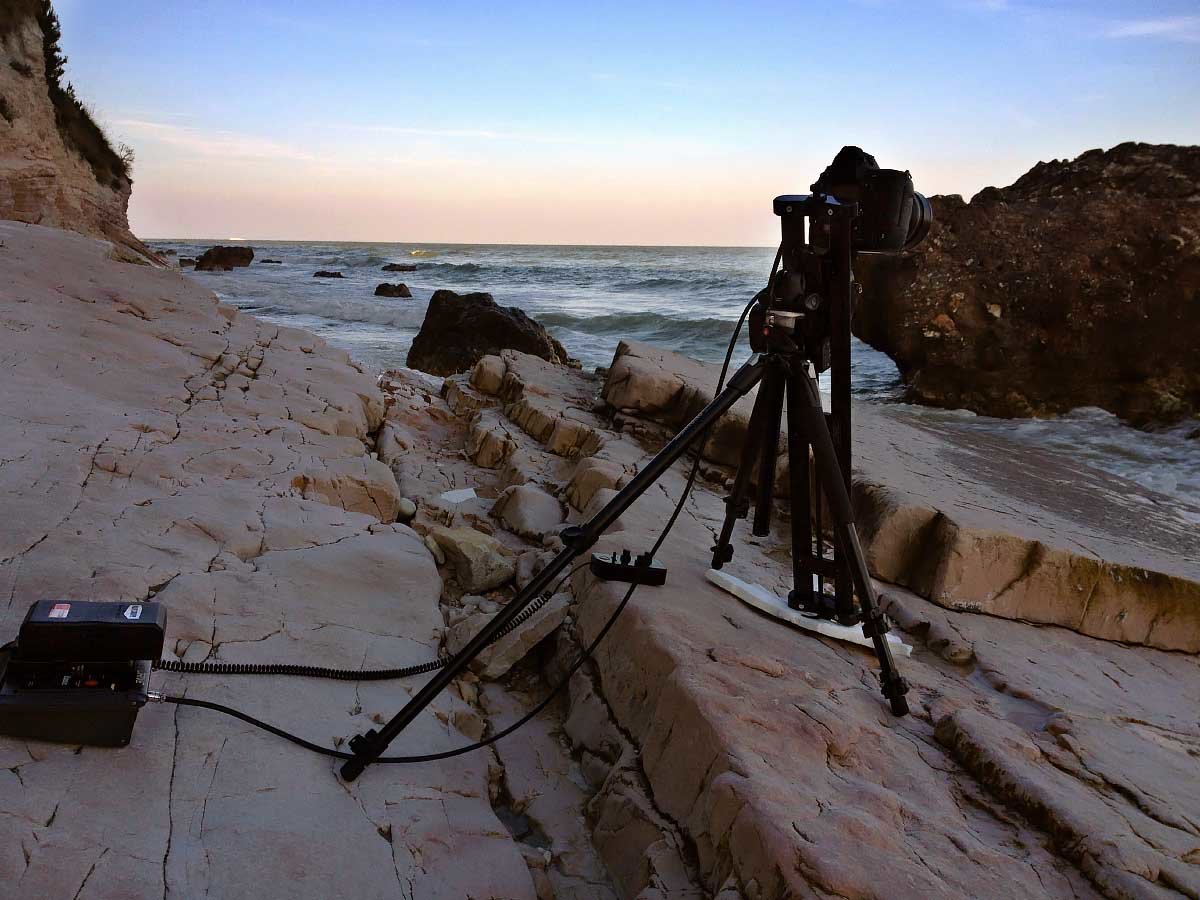 This motion control unit is compatible with every SmartSystem’s motion kit and composed by a control unit (DigiDRIVE Basic) and a controller (DigiCONTROL Mono).

The external case is aluminium anodised made to be lite and strong, it weights only 1.6 kg, and it’s quite small (15x18x8cm).

The appearance is nice and the laser markings that creates the graphical user interface of control are really sharp.
Thanks to DigiCONTROL Mono it is possible to control the movement of the motor and to set the cinematic settings that are maximum speed, acceleration and joystick sensitivity.

The control unit is equipped with the following connections: motor cable, USB and a TRS 2.5mm connection to control the camera shutter. This last is a basic feature to create time lapses and stop motions. On the DigiDRIVE control panel we find two buttons: a black one (the “Mode Select”) that changes the DigiDRIVE Basic operating mode, and a red emergency one that disconnects the power to stop the movement in the case an emergency situation occurs. Making the DigiDRIVE operative again means then to shut it down and restart it.

The operating modes are:

About the DigiDRIVE powering, it can be connected directly to the electricity grid thanks to a power adapter provided by SmartSystem or it can be powered by a V-Lock battery thanks to the standard V-Mount interface on the DigiDRIVE.

Even if this solution isn’t very cheap it grants a great reliability and a very long operating time… almost aeternal (it’s about 24 hours of constant using).

I have been using the DigiDRIVE Basic on my time-lapses for some months and I can say that the SmartSystem equipment is really easy to transport also thanks to its padded bags.

I always lean it on the floor and rocks, in wet and salty environments and it never gave me any technical issue: it was always reliable and worked fine. The red leds make it visible and controllable also by night without affect the shots with lights.

Anyway I think that the feature of the product is that it allows me to create customised movements with unexpected speed increasing or decreasing, and this is very useful to create something unique and extraordinary.

I have been using this equipment for some months, sometimes also in almost unreachable places and the transport padded bag are really helpful. I never uninstall the motor from the slider even when I put it in its bag, while I put DigiDRIVE and DigiCONTROL Mono in another small bag.

I keep the two bags one in an hand and one in the other hand,while in my backpack I put my tripod and my DSLR camera. That’s how I bring my stuff while I’m working.

The battery is very long lasting also at the lowest temperatures: it was tested at -25 °C in Iceland. In more mild weathers it passes the 24 hours consecutive of work.

The product is surely a very professional one, as it’s proved by the quality of manufacturing that can be perceived just touching it, and it’s been highly confirmed using it.

I’ve tested it for several months, and I’m actually using it to produce a lot of shots and work. I waited for these months to write this review just to be sure to make real tests on the field also in the worst conditions, in very wet and slippery places, that are often not easy to reach.

I repeat: the technical features are important but for me what really matters is having the best handiness possible.